Xenoblade Wiki
Register
Don't have an account?
Sign In
Advertisement
in: XC1 Weapons, Pages with spoilers, XC1FC Weapons,
and 2 more

Weapons can be dropped by enemies, earned from quests, bought or sold at shops, or received through trading with NPCs.

Each character can use only one distinct type of weapon which is exclusive to that character. For example, Reyn uses gunlances; he cannot use any other type of weapon, nor can gunlances be used by anyone else. The only exception to this is the Monado, which can be wielded by Dunban at the start of the game, and is later passed on to Shulk.

When selling weapons at shops, the sell price is dependent on the number of empty slots. Each slot adds 20% of the price of the slotless version; a weapon with 3 slots will sell for 60% more than the same weapon with no slots. If the player has equipped any gems in the weapon's slots, they will be removed and returned to the player's inventory when that weapon is sold.

Riki's Buy Stuff! skill increases the selling price by 20%. This bonus is received even if he is not in the active party. In the case of slotted weapons, the bonus is 20% of the normal sell price of the slotted item.

Monados are wielded by Shulk after it being passed on to from Dunban.

At the start of the game, the Monado is used by Dunban in the Battle of Sword Valley, which is equipped with a normally unobtainable Unbeatable 100% gem. When he joins the party briefly in Colony 9, the Monado has two empty slots instead.

Initially, Shulk uses the Junk Sword, which has a fixed attack value and gives Shulk Turn Strike as his Talent Art. All other Monados' attack values scale with Shulk's level up to 999-999, and equipping them allows Shulk to use Monado arts such as Monado Buster. All these weapons function identically otherwise.

† Confirmation of the formula is needed. Current data is based off of Xenoblade Google Document.
※ Unused content, it cannot be obtained in normal gameplay.

Gunlances are wielded by Reyn.

Knives are wielded by Fiora. They come in pairs, and all knives have the same appearance, only one skin exists for these weapons.

※ Unused content, it cannot be obtained in normal gameplay.

Twin Blades are wielded by Fiora in her Mechon body. They always come as a matched pair, one for each hand, and can always damage Mechon. 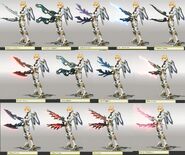 Swords are wielded by Dunban after he passes the Monado on to Shulk.

† = Capable of damaging Mechon enemies without Monado Enchantment.
‡ = 8-A and 8-B have a blade of glowing blue energy when drawn

† Capable of damaging Mechon enemies without Monado Enchantment.
※ Unused content, it cannot be obtained in normal gameplay. It also has a unique description, which reads, "The firearm left to Sharla by Gadolt. It gives Sharla the strength to go on."

Biters are wielded by Riki.

† = weapons that can damage the Mechon 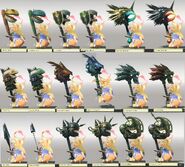 Staves are wielded by Melia.

† Capable of damaging Mechon enemies without Monado Enchantment.
※ Unused content, it cannot be obtained in normal gameplay. It also has a unique description, which reads, "Hidden objects come into view. Proof of multiple planes of existence."

Guest characters join the party for only one or two battles at certain points in the story. Their weapons cannot be removed or changed.

Monados are wielded by Shulk. They function identically to the Monados in the Main Game but with the absence of Monado Enchant.

The Monado's attack power increases with Shulk's level up to 999-999.

Note: Shulk cannot go under level 60 in Future Connected, so the maximum attack for Monado Replica EX+ is always 999.

Staves are wielded by Melia. They function identically to the staves in the Main Game and share the exact same attributes.

Ether rifles made from gunberries are wielded by Kino. They function identically to Sharla's weapons in the Main Game, except Kino's Battle Arts use different animations.. 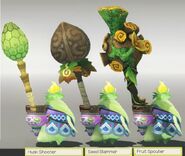 Blockers are wielded by Nene. They function mostly identically to Reyn's weapons in the Main Game, except Nene's Battle Arts use different animations.