The World Tree (Japanese: 世界樹, Sekaiju) is a main location in Xenoblade Chronicles 2. It is a towering tree standing in the center of the endless Cloud Sea. The inhabited world of Alrest lies around it. The fabled paradise Elysium is said to be located at the top of the World Tree. The exterior of the World Tree is covered in thick growths of wood and leaves while the interior is technological-themed, a mechanical tower with robotic enemies.

The World Tree is a portion of the space elevator leading up to the First Low Orbit Station. After Klaus created Alrest, vegetation began growing around the space elevator, and the glyphs around the elevator gave it the appearance of a giant tree. The people of Alrest began spreading stories that the humans used to live in Elysium at the top of the World Tree with the Architect before they were cast out and sent to live on Titans.

Praetor Amalthus became the first person to climb the tree, where he found Elysium empty and took two Core Crystals back with him to Alrest. He awakened Malos, and the consequent destruction led to Addam awakening Mythra, resulting in the Aegis War . After the war, all passage to the World Tree was forbidden; the Kingdom of Tantal used the Omega Fetter and commanded Ophion to guard the World Tree. To do so, Ophion created the Great Void around the Tree.

Rex and company first set out for the World Tree after borrowing a ship from Umon. However, Artifice Ophion attacks them and they end up crashing inside of Uraya. They eventually learn from Cole that his Driver would know how to get to the World Tree. His Driver turns out to be Amalthus. At the Ruler's Congress, multiple nations agree to lift the ban on traveling to the World Tree.

When the party rescues Pyra and Mythra from the Gotrock Oracle Ruins in the Cliffs of Morytha, the battle between Ophion and Siren destroys the cliffs, causing them, and Jin, to fall through the Cloud Sea and land in the Land of Morytha. The remaining members of Torna retrieve Jin with the Marsanes, leaving the party to climb the Tree from inside. The roots of the World Tree are accessible from the ruins of Morytha, and the party finds an elevator that will take them up inside, where they discover that the Tree is a tower surrounded by plant life.

Jin and Malos leave the Marsanes at a certain point to continue climbing it on foot. Indol arrives, and Amalthus attempts to destroy Torna before they can climb the Tree. He released multiple Indoline Stars and Indoline Sentinels, while Torna uses the Blade Bots to fight back. He later uses Fan la Norne's Core Crystal to control Mythra into summoning Siren, though Mythra resists. After not getting help from Mythra, he summons Mor Ardain, Uraya, and Genbu to the World Tree and orders Mor Ardain and Uraya to fire energy blasts at the Tree, hoping to destroy it.

With the help of Poppi, Rex and Mythra get close enough to Indol, and Mythra assumes her ascended state to destroy Indol's amplification towers, causing the Titans to stop attacking the World Tree. The Marsanes, piloted by Mikhail, then assumes a Titan-like form. Mikhail protects the party from a large blast from Indol, allowing them to continue climbing the Tree. Mikhail then uses the Marsanes to slam Indol into the World Tree, and the Titan and the Marsanes sink in a large explosion.

Jin stays behind at Megrez Gateway to fight the party and begins to understand Rex's view on the world. Amalthus ends up escaping Indol before its demise and arrives at the battle. By absorbing all the Core Crystals Indol had gathered, he assumes a new form with long, blue tendrils. He kills Akhos and Patroka before the party can subdue him. In desperation, Amalthus begins binding his body to the World Tree so that the party cannot meet the Architect. He is eventually killed by Jin, who dies peacefully afterward. The party then continues up the World Tree and reaches the First Low Orbit Station.

As Shulk kills Zanza, Klaus and the Conduit begin to fade out of existence. Due to the Conduit's disappearance, everything above Elysium is detached and begins drifting out into space, but the rest of the World Tree and the First Low Orbit Station begins to collapse. To save Alrest, Pneuma sacrifices herself to activate Artifice Aion one last time and destroy the World Tree using its power. The party eventually agrees to this and escape the World Tree while Pneuma seemingly dies in the explosion that destroys the Tree.

In Super Smash Bros. Ultimate', the World Tree can occasionally be seen in the background of the Cloud Sea of Alrest stage. 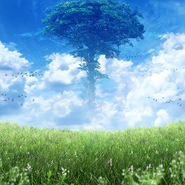 Official artwork of the World Tree

Rex and Pyra observing the World Tree by night