Xenoblade Chronicles is a role-playing video game franchise developed by Monolith Soft and published by Nintendo. It is considered to be a part of the Xeno metaseries.

The series currently consists of a trilogy and one spiritual successor, which cover the Nintendo Wii, Wii U, and Switch, as well as one port to the New Nintendo 3DS. In addition to the games, the series has also been featured in Super Smash Bros. for Nintendo 3DS / Wii U, Project X Zone 2, The Legend of Zelda: Breath of the Wild, and Super Smash Bros. Ultimate.

Nintendo unveiled Xenoblade Chronicles at E3 2009, then known as Monado: Beginning of the World. The game was later renamed to Xenoblade to honor the director of the game, Tetsuya Takahashi, who birthed the Xeno metaseries. Xenoblade Chronicles (titled Xenoblade in Japan) was released on June 10, 2010 in Japan, August 19, 2011 in Europe, and April 6, 2012 in North America.

On January 12, 2017, Nintendo announced Xenoblade Chronicles 2 for the Nintendo Switch. It was released in Japan, North America, Europe, Australia, Hong Kong, and Taiwan on December 1, 2017. An expansion to the game, Torna ~ The Golden Country, was released on September 14, 2018. 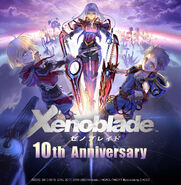 Illustration commemorating the 10th anniversary of the series

Illustration commemorating the 10th anniversary of the series

The first three games in the series until 2022
中文
Community content is available under CC-BY-SA unless otherwise noted.
Advertisement