View source
watch 01:10
Who is Zeke?
Do you like this video?
Play Sound

His Highness the Crown Prince Ozychlyrus Brounev Tantal (Japanese: ジーフリト・ブリューネ・ルクスリア, Jīfurito Buryūne Rukusuria, Sîvrit Brunet Luxuria), better known as Zeke von Genbu (Japanese: ジーク・Ｂ・極・玄武, Jīku B Arutimetto Genbu, Zeke B Ultimate Genbu), is a Driver and one of the main playable characters in Xenoblade Chronicles 2. He is accompanied by his Blade, Pandoria. They have a pet turtle who they call Turters. Zeke joins the party during Chapter 5, right before embarking to Temperantia.

Zeke is prone to flamboyant speech and mannerisms, styling himself as "Zeke von Genbu, Bringer of Chaos" and "The Zekenator", and uses similarly grandiose names for his sword and arts. He is known throughout Alrest as "Thunderbolt Zeke"; the Crown Prince and most powerful Driver of the Kingdom of Tantal. Nia sometimes calls him "Shellhead". However, his over-the-top demeanor masks a deeply cynical person. Zeke's travels as a young man showed him the worst the world had to offer, and he lost belief that he could be a hero or save the downtrodden. However, upon encountering the young and idealistic driver of the Aegis, Rex, he regains some hope for the future and takes it upon himself to help Rex achieve his goals. Despite his joking, he is one of the most emotionally mature party members as well as a wise companion to Rex.

Zeke is a tall and muscular man with short and spiky dark gray hair. He has part of Pandoria's Core Crystal embedded in his chest, marking his condition as a Blade Eater.

Zeke's most notable trait is his black eye patch that covers his left eye, which he claims is his Shining Eye of Justice but Pandoria suggests is due to him only being able to afford one contact lens. He is usually dressed with a long black coat that he tends to leave open, exposing his chest, with armor over his knees and shoulders. He also also wears black gloves that cover his forearms, and black/mint green boots.

Despite having grey eyes unlike other Tantalese, who have red eyes, Zeke uses contact lenses, so his actual eye color may be different.

Zeke has three alternate costumes which can be obtained as DLC Aux Cores via Challenge Battle Mode. These are:

Around the age of 15, Zeke was disowned by his father and banished from Tantal, mainly due to him leaving the nation multiple times despite Tantal's isolationist policy. Later, he ends up severely wounded after a battle in a forest. Pandoria tries to carry Zeke, on the brink of death, to safety, but collapses. Praetor Amalthus arrives on the scene and takes the two back to Indol. He then takes a portion of Pandoria's Core Crystal and implants it into Zeke's heart to save him, effectively making him a Blade Eater. In return, Zeke became a special envoy for Indol to find and test the new Driver of the Aegis.

Before he departed from Indol, he shared a few conversations with Amalthus. Amalthus asked him whether he had ever killed a person, and Zeke answered that he hadn't, as killing is a sign of weakness. Zeke later talked of how some bandits in the forest attempted to take Pandoria's Core Crystal and sell her. Amalthus responded by stating that humans forcibly take that what is denied to them, but Zeke challenged this claim. Zeke then asked why he even bothered protecting the refugees in Indol, to which Amalthus replied he must never forget the true nature of humans. Zeke asks whether that was why Amalthus saved him, and Amalthus draws a comparison of Pandoria trying to save Zeke to his own mother saving his life.

Zeke first meets Rex and the others nearby Cobalt Cliffs in Uraya. He challenges them to a battle, but a cliff that he was standing on collapses, and he falls and disappears. He reappears once more before the party can reach the Old Factory and challenges them again. This time, a large boulder sends Zeke and Pandoria flying off into the distance. He later shows up in Ysheva Harbor to challenge them to another battle. Though the party remains skeptical, as all other times have resulted in his defeat, he performs Sonic Thunderslash and knocks down the party, much to their surprise. Mòrag then reveals that he is the crown prince of Tantal. After battling the Aegis, he takes the party to Indol.

Zeke later represents his home country of Tantal at the Ruler's Congress. Acting as an eyewitness alongside Mòrag and Mythra, he convinces Queen Raqura that the Titan Weapon attack was the work of Torna and Malos.

He then guides the party to Theosoir, the capital of Tantal. He reveals the poor state of the Tantalese people, showing a dislike for his father's rule. After Pyra is captured, Zeke rescues the party and helps divert the Ether Accelerator's aim. This, however, causes Genbu to quickly dive beneath the Cloud Sea, threatening all life inside it. To save Genbu, he joins the party to get to Genbu Crown and fix the Omega Fetter. When the party defeats Mikhail, Patroka, and Akhos, Zeke intends to imprison them before Jin turns the tide. After the Aegis is taken by Torna, King Eulogimenos tells Zeke to travel with Rex and protect him.

As Zeke and the others climb the World Tree, he recalls his first conversation he had with Amalthus, and asks whether Rex likes the world. Naturally, Rex responds that the world is a good place and that though some people are bad, life is about taking both the good and the bad. As Amalthus is being killed by Jin, Zeke recalled his other conversation with Amalthus. He then wonders how Amalthus could be filled with so much hatred, yet he seemed so sad in that one moment.

These are Zeke's Idea Stats upon joining the party.

Pandoria is Zeke's default Blade and can only be used by Zeke and later, can also be used by Rex.

The Unleash Shining Justice skill grants Zeke the ability to enter a special state in battle. In battle, with Pandoria and at max affinity, the player can press

to activate the skill, during which blue flames ignite on Zeke's eyepatch, whether or not playing as Zeke. Zeke gains several buffs, including much faster art animations, immunity to all debuffs (Topple, Blowdown, etc.), movement speed faster than when at normal max affinity, and a very large damage multiplier. However, the effect is only temporary, can only be activated once per battle, and instantly inflicts Blowdown on Zeke once it ends, which is indicated by Zeke laughing loudly.

Zeke is fought three times as a Driver boss along with his Blade, Pandoria. He is first fought at level 23 at the Cobalt Cliffs in the Kingdom of Uraya, then at level 32 at the Chansagh Wastes in the Empire of Mor Ardain, right before the Old Factory, and at level 35 at the Ysheva Harbor in the Leftherian Archipelago. He is also fought as a hallucination in the First Low Orbit Station.

This enemy drops no items.

Zeke is one of the characters who can appear on the Super Smash Bros. Ultimate DLC stage, Cloud Sea of Alrest, where he may be present in the background alongside Pandoria. Zeke also has a Spirit that can be unlocked on the Spirit Board. His spirit is represented by a puppet fighter of Cloud Strife that sometimes randomly unleashes a powerful attack, and is aided by a minion fighter of Bayonetta and an electrified floor. 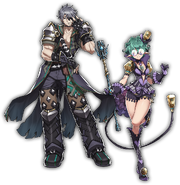 Official art of Zeke and Pandoria 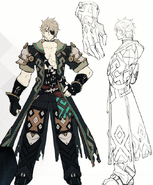 Concept art of Zeke and his eyepatch

Zeke and Pandoria in "disguise"